Adrian Benepe is the former Commissioner of Parks and Recreation for New York City.

“Imagination Playground opened in 2010 down near the South Street Seaport in a place called Burling Slip. It was a brand new concept for a playground, fittingly at the beginning of the 21st century, where basically David Rockwell sort of reinvented the concept of a children’s playground.

“The Imagination Playground at Burling Slip has been a runaway success. It’s crowded all the time. You know, we have to extend the hours, keep it open during the winter. We didn’t expect to keep it open during the winter. People just love it. In this business of parks, people vote with their feet. If a playground is popular, it’ll be packed. If it’s not working, there’ll be nobody there. Imagination Playground is busy with the neighborhood residents, it’s busy with tourists, and because people travel from all over the city to get there. It was recently ranked one of the top playgrounds in the city.”

“a quick fix that brings more life to the playground”

“Compared to building a set in place, permanent piece of climbing play equipment, this is very inexpensive. Sometimes you don’t have the money to retrofit a playground. The playground in the box is a quick fix that brings more life to the playground. It’s a really inexpensive but quick and vital way to get kids playing and bring a burst of life to any kind of recreational setting.”

“Bringing out an Imagination Playground in a box to a local community really sort of has an instant upgrading effect. It makes you feel like state-of-the-art. We’re cutting edge. We count. We’re important. In the ideal world, you’d have a set in every playground. Any place that has some staff in it should have a playground in a box. It’s well worth the investment.”

“Imagination Playground is the first playground in New York City to really focus on—things other than the climbing, running, and jumping skills. It focuses on the uses of the imagination and particularly on the fine motor skills and cooperative interactive play with other children and with the environment. Children love building things with blocks, so all of these things that David Rockwell was proposing really made a lot of sense. We just had never done them before.”

“While we have playgrounds that are beautiful and safe, there’s a limit to what you can do with them. There’s only so many times that you can go up this set of stairs and down this slide and climb this rope ladder or whatever it is you might do. The opportunities for imaginative play were not constant or frequent.”

“The blocks really bring kids together. You just sit there and watch and right away, kids will start working with each other and building things. There’s this almost an unspoken communication that takes place and they just start building and fitting and making. These little props serve as icebreakers among kids. They get together and they start making these magical kingdoms.”

Hear about how Imagination Playground is making an impact in real education, child care, and recreation settings.

The Imagination Playground that Started It All 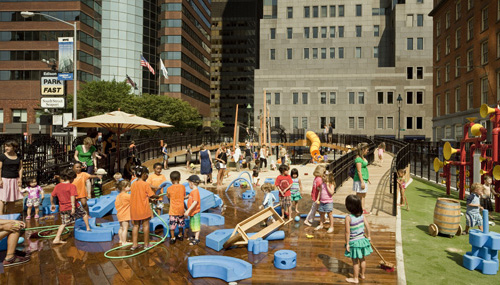 Learn more about the the flagship Imagination Playground at Burling Slip in New York City.